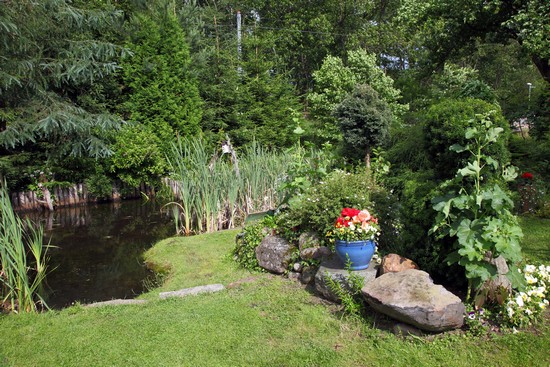 This is the fourth in a series of articles about the principles of design.

Of all the principles of design, most people will probably find rhythm the easiest to understand. This is because rhythm in the visual arts is very closely related to rhythm in music.

According to the “Handbook for Flower Shows”, “Rhythm is achieved by having a dominant visual path of line and or color through design, making design appear to be alive”.

When creating a musical composition, rhythm is achieved by repeating a pattern of musical notes. This repetition creates a musical line which flows through the air. In a garden, the visual notes are static but they are experienced like music as we move through the garden.

This series of articles is mainly focused on floral design, because are usually less complex than gardens, so it may be easier to understand how the principles of design apply, but rhythm in garden design requires fewer artistic tricks. It is really only when a garden is not designed to be physically moved through that it needs to be artfully composed like a painting or floral design in which the viewer’s eyes are lead along a dominant visual path.

While a garden, like music, is more naturally alive than a painting or floral design, poorly designed gardens often lack rhythm or have uninteresting rhythms. As in music, hitting the same few notes over and over will create a rhythm, but the result will be boring or even maddening.

This is not to say that formal gardens lack interesting rhythms. When people think of formal gardens, they often picture flat parterres. The patterns of these parterres create rhythms similar to oriental carpets. They have an immediate appeal, but they quickly bore many people. The most effective formal gardens contrast their sunny parterres with shady woodlands. These woodlands usually have straight paths which echo the formal patterns of the parterres. Some gardens do have informal paths in the wooded areas but such an abrupt shift tends to disrupt the garden’s rhythm. It is like suddenly moving from Bach to Wagner. In my garden the paths become increasingly informal as you move from the formal areas towards the paths winding through the natural forest which surrounds my garden. This is an example of how gardens are closer to music than floral designs are. It is just about impossible to have that much variety in a floral design – you would have to decide on whether you wanted formality or informality. The formal part of my garden is over an acre and I live on 15 acres of natural forest. In a suburban backyard you will have limitations similar to a floral design – too much variety will disrupt the garden’s rhythm, but if you can move through your garden, you can still have quite a bit of variety as long as the transitions are smooth.

Many people think that you can’t have as much horticultural variety in a formal garden as in an informal garden, but this isn’t true. The strong geometric patterns of a formal parterre will give your planting beds rhythm even though the plantings are a riot of color. The same riot in an informal cottage garden will usually require subtle color transitions such as lots of gray foliage or lavender flowers (lavender is a great “blender”). This is because the paths in a typical cottage garden are so modest that they don’t give the garden much of a visual line, so rhythm has to be established through the use of color.

If you are using color to establish rhythm in a garden, a limited palette is much easier to manage than a riot of color. Picture a cottage garden of soft pink, lavender and white, accented by brighter pink and rose-red. Without the stronger colors, the garden’s rhythms would be pleasing but rather boring. By using the stronger colors like notes of music, you can easily give this garden delightful rhythms that never fail to please.

Another advantage that gardens have over floral arrangements is that in a reasonably mild climate, you can have blooms throughout the year. This allows you design a garden to have rhythms that change from week to week as one plant begins blooming while another stops. Picture a cottage garden with lots of lavender blooms throughout the year. This garden could have a pink and rose-red theme one month and yellow with orange at another time of year.

You could create rhythm by selectively thinning a grove of bamboo, so that as you move through it the individual culms are like notes in a subtle piece of music. Water can also be used to enliven a garden. At the Villa Lante, begun in 1573, water from an aqueduct is lead through a series of fountains beginning at the top of a hillside. The entire garden is formal in structure, although the hillside is softened by a dense planting of trees.

You want to have a garden with good rhythm and customized to your needs? Contact Portland TT company and their professional staff will be in touch with you for more details. 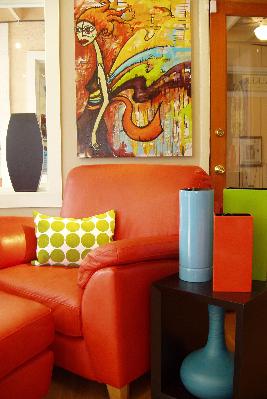